Resolution 2014: How do you keep your racers?

Underneath a table in my home office are nine Girl Scout cookie boxes. In those nine boxes sits about 42 derby cars. That represents my original PWD racer my dad helped me make as a boy from the 70s, and then a bunch of cars from 2007 up until today. All five of my children (1 boy/4 girls) have been involved in AWANA, my son was in Cub Scouts and of course I had to make something every year (just to keep me from doing too much work on their cars). One (and only one) year I convinced my wife to make a racer for the AWANA Grand Prix Leaders & Cubbies race.

So these 40+ cars are mostly a mixture of AWANA Grand Prix cars and BSA Pinewood Derby racers with a smattering of ‘other’ style kits – Canadian and BSA 18 wheel big rigs, GMC motorhomes, BSA Blast Car and such. The cookie boxes are the right size to transport 4 or 5 cars at a time to an AWANA Grand Prix race, which is how the practice started. The cookie boxes are the right width and the built-in handles make for very easy carrying. At the end of the race, the transport box turned into a storage box. Sometimes the cars in the various boxes would get shuffled as my son or I took specific racers to a BSA PWD race or to an AWANA build workshop as examples and for inspiration.

Anyway, as I put the 8th box down with my girls’ 2013 AWANA entries and thought about the additional four cars they’ll make in the new year and contemplated my son’s 2014 Cub Scout racer yet to be built (he’s now a Boy Scout Eagle, but is also a Den Chief for a group of Bears and they gave him a kit to race as a leader) and the four or so partially completed racers of mine on top of one of the tables, as well as the dozen or so kits that I have yet to even start, I resolved in 2014 to find a better way to keep them all. So I am prompted to ask all you derby maniacs - How do you keep your cars?

I have thought about taking one (or two) of those plastic Rubbermaid holiday wrapping paper tubs, buying some 2 or 3” foam to line the bottom and then cutting holes in the foam for each car to sit in. But so far, that’s it for my ideas. I know from the photos I’ve seen on here and the conversations in the forums, you all are an EXTREMELY creative lot. So help me help myself.

I store my derby cars in a pair of display cases. They were a gift from my mom. 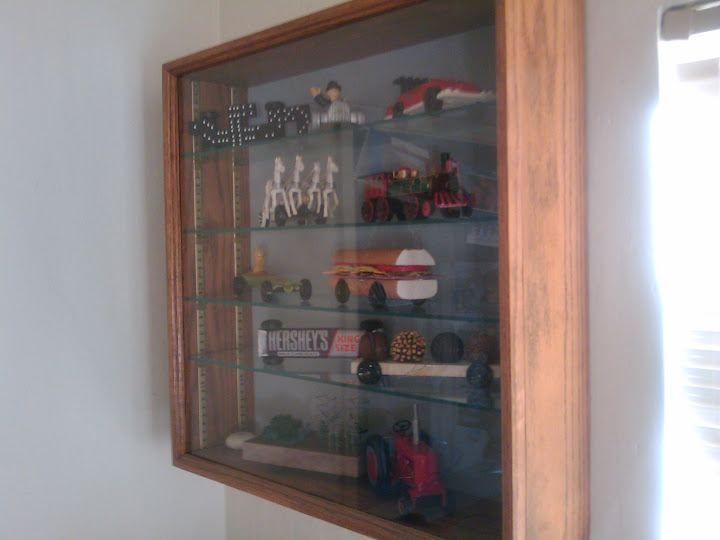 When I take my derby cars somewhere to display them, I transport them in shoeboxes or similar shallow boxes. I display them by setting them on pieces of 1x2" boards cut into 4" pieces. These act as stands to keep the wheels off the table, to keep the cars from rolling away, but they have a low visual profile.

Great looking case Darin! I could make something like that to show off the latest round or so of racers, but I don't have enough wall space to show 40 or 50 cars.

Yeah, I can relate. The way the cars are currently arranged, the cases can handle 28 cars, so I've got a couple years to figure out where I could put a third case, or how to rearrange the cars to fit more in the two cases I have.

Before I got the display cases, I stored my cars in boxes that the kits had originally been shipped in. I could fit 4 or 5 cars in each box.

Nice case Darin. Right now our cars sit disassembled in a cardboard box in my closet, nested away in Ziplock bags (wheels and axles wrapped up in their own snack bags, then stored in the larger gallon with their cars) except for last years cars which are still assembled. I plan on using them to compare this years cars against.

At some point I want to setup a display case for my kids' cars so they can show them off.

My 2 boys each have a trophy shelf in their room, below each, there is another shelf just to display their pwd cars. We put small blocks of oak under each one (stained to mach the shelf).

We usually keep the last few cars in a case we made (more like repurposed) for transporting cars. I found a cheap poker chip case that had like 100 chips and 2 decks of cards, but looks like a metal briefcase (like something that would be handcuffed to a security guard). The first year, we just used it as is, since our cars would like surf boards, and the poker chip slots aligned perfectly with the wheels on top and bottom, so 2 cars would fit nicely lengthwise. The next year, I simply pulled the trays out (they were just glued in), and put some foam I had from some computer part I ordered on the bottom, top, and sides. With that foam in there, 4 cars fit nice and snug with some room in between for oil, tungsten putty, and the axel pliers. The whole thing was basically free (since I moved the chips to another case anyways), and the boys love carrying it around, and always get several comments about it, since it looks very professional outside.

Even if you didnt need the poker chips, the set was only like $10 a few years ago.

This may be the set we used, but I purchased it many years ago - http://www.amazon.com/Poker-Set-In-Alum ... +chip+case" target="_blank

Nice idea Rukkian. I like that for transportation maybe. But I'm looking to keep/store the entire collection (42+ racers now and growing at a rate of 5+ cars per year).

I knew it was not exactly what you were looking at. I cannot even image trying to keep that many cars. Are you looking to display them, or just store them?

Mostly store them. The kids enjoy displaying them short term and I might build something for the wall for 10 or so, but I can’t bring myself to take them apart or recycle them. I want to preserve them so they can show them to their kids, hopefully when they enter the Pinewood Derby or the AWANA Grand Prix.