Happy Birthday Speedster and Anniversary to you Bill & Sharon.
Hope it's a good one !

Speedster I know your into helping kids make these cars.. just about as much as I am!

You may recall the vintage Boy's life car I first shared pics of here on Derby talk !
Well don't know if I've ever told you that I had help making this car In Memory of Don Murphy with the kids of Cub Scout Troop 189 in Hugoton ,KS
The kids and I built this car at my first workshop with them .. the colors of the car was inspired by the Pinewood - A Game with a Purpose image.
It was raced for the 100th Anniversary to Scouting ..The car ran an avg time of 3.088 at 160.1 on the pack's 35 ft best track!

Well Bill.. never once did the kids and I give much thought to where the car would end up when we made it together.
Today the car can be seen here:
https://www.pinewoodpro.com/pinewood-derby-museum.php


The three images are some images that Joe of Pinewood Pro shared with me of the museum. 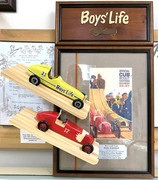 Happy Birthday Bill and Anniversary to you and your wife !

Thank you Mark for your Best Wishes. You are very kind.
Yep, I turned the BIG 80 and it was our 45th Wedding Anniversary. Without going into a long, long story, Sharon and I traveled to Fort Wayne, Indiana where Sharon and I met with the son of her biological father. He's a Great guy. It all started 68 years ago in Point Pleasant, West Virginia, and was discovered on Ancestry. What a Reunion that was!

I'm very familiar with that beautiful Yellow car. Our workshops start with my presentation and my presentation starts with every scout getting a picture of that car. That's the shape of all the cars in the Indianapolis 500 race in 1953. That's why the scout cars were that shape in the first Pinewood Derby race. The scouts also get a picture of the shape of the cars in todays 500 race. A kindergarten teacher taught me a 6 year old child has the attention span of 5 minutes. Everything I have to say is taped to the walls and I refer to each one as I talk quickly. We cover all the basics and they can go back to the room to see what was said if they wonder what was said.

They all know the basics of what it takes to make a block of wood go down a hill Fast. What they then want to do with their block of wood is up to them.

Thanks Whoda, For Everything.

Return to “General Off Topic”